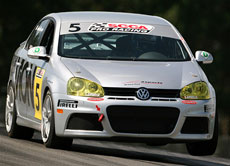 The first episode of the “Rookies to Racers” mini-series is premiering on Discovery on April 1st at 7pm. For me, it marks the end of a journey that started nearly three years ago with a last minute assignment to cut a pitch reel for a “show about kids racing.”  I had just wrapped on “Kobe Disciples” and was looking forward to some time off, but the opportunity to create a new racing show was too tempting to turn down.  It took a couple of late nights to get it done (I actually left the “Kobe” wrap party early to go back to the office) but when life gives you great opportunity, aim for the fences.  The pitch reel was a hit and a few months later I started work on the first season of “Racing Under Green.”

After three seasons, 28 races, 3 championships and more than a few totaled cars, I am very sad to report that the Jetta TDI Cup is no more. Volkswagen of North America will be taking a break from racing in 2011 but hopefully they will be back next year with something even bigger and better. I sure hope they return, because American motorsports really needs more driver developmental programs like the TDI Cup.

To the nearly 150 drivers, driving instructors and family members who were part of the TDI Cup, I would like to say “Thank you” for inviting us into your lives and sharing your stories with us. I hope to see you all again in the winner’s circle.

“Master Class” Premieres on OWN